A few months ago at a community garage sale, my son wasted some money on an Anaheim Angels clock.  I'm sure whomever he bought it off of heaved a huge sigh of relief as he left their yard.  He isn't even a big fan of the team, I think he just liked the way it looked.

It's an old-fashioned looking clock, with little feet and fake alarm bells at the top.  I'm sure I did not describe that well at all.  Let's see if I can find a picture that sort of looks the same. 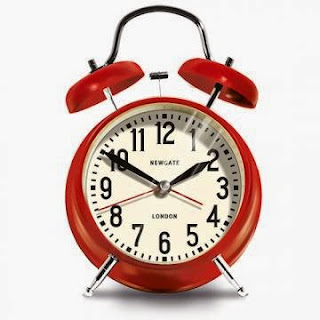 There we go, it looks exactly like that, even the same color.  Except picture the maybe not-so-famous mascot of the Anaheim Angels, the Rally Monkey, dancing on the face.

For the longest time it just sat around, first in my son's room, until my daughter stole it and then it sat in my daughter's room instead.  Simply a change of locale. It didn't actually function, it just looked sort of cool, apparently.

Finally, my daughter found some batteries and put them in the clock.  I dubiously watched her placing them in the slots, wondering if the thing would even work.  Lo and behold, the hands started moving and time was being told.  The destiny of that clock was finally fulfilled.

Quickly forgetting about it, as five year olds are wont to do, she placed it on the fireplace mantle in our kitchen, which is right next to my computer desk.  I was sitting at my desk and talking to my husband one night, and the rest of the house was fairly quiet.  Suddenly I heard this weird, repetitive noise that I couldn't quite place.  It sounded really familiar, but yet foreign at the same time.

I looked around, and it was the clock!  Making that very distinctive sound that the second hand makes as it moves around, doing the job it was made to do.

What I couldn't believe is that I grew up with multiple clocks in our house, in everyone's house, and back then the sound never even registered.  It may have even been comforting at some points.  Not to even mention the grandfather clocks, which both sets of my grandparents owned.

But now, with non-digital clocks being the outliers, not the norm, the sound was intrusive.  Unwelcome.  A sound I don't choose to have around me, when I definitely have a choice.

Maybe I just need to move it further away from me.

I am surprised about the batteries. It really looks like a wind-up.

I hear you (no pun intended, really). We have a couple of ticking clocks, and sometimes they sound almost deafening. Then they go back into the white noise of the house again. No idea why their sound suddenly becomes apparent, even intrusive.

Because the Past is Rockin'

Because I Love My Peeps